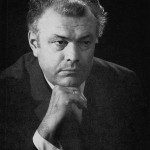 Even though Eduardas Balsys (1919-1984), one of the most talented Lithuanian composers of post-war generation, spent his most productive years in the period of Soviet regime, his music stood out for its high artistic standard, and still remains appealing and fresh-sounding. The leader of stylistic breakthrough of the 60s and one of the most influential figures in the post-Stalinist resurgence of Lithuanian music, the composer is ascribed to moderate modernist trend. The most important part of his output consists of large-scale compositions – a ballet, an opera, oratorios, and concertos. Balsys was one of the best masters of orchestration in Lithuania, and also an excellent teacher of composition. He has educated a number of today’s leading composers and musicologists.

Works, write for birbyne with other instruments:

This entry was posted in Lithuanian composers. Bookmark the permalink.